So you might be wondering what other kinds of artwork I do!

Well – in 2015 I painted a fiberglass bear for the Art Museum of Greater Lafayette, as part of their “Lions and Tigers and Bears! Oh My!” fundraiser.

I remember when they did those wonderful bulls in Chicago, in 1999.  We had just moved to the suburbs of Chicago and I didn’t know anybody, I didn’t know how to get involved.  I watched those bulls being carted around town and felt SO jealous!  It was such a neat project, I loved seeing the results

So when I heard about this project, I leaped at the opportunity!

I had to write a proposal explaining and illustrating my idea.  My concept was that bears have their own experience of Monarch butterflies, the wonder of being among them.  Bears and butterflies are both “of nature” in a way that we aren’t.  So I thought I’d paint this bear in the middle of the butterflies and try to make his form disappear, as though he and the butterflies had merged.

I worked on my bear in the lobby at Reed & Company on Main, so if the setting looks familiar that’s why LOL!  The bear is about 3′ tall, 3′ wide.

I actually painted it twice – the first time, I didn’t put on as many butterflies, and the blue paint wasn’t as rich.  It looked more like a watercolor painting than acrylic.

So I was nearly done and I was standing there looking at it and some woman walked through the lobby and kind of sneered at me.  “Looks kinda skimpy” she said.  At first I was offended.  People say rude things to artists, it happens a lot.  But then I looked some more and thought hmmm, well, maybe she’s right.  Maybe I was being too timid.

So I bought more paint and started over again with the blue, covering up the butterflies that were already there.  This time I went ahead and made it dark. 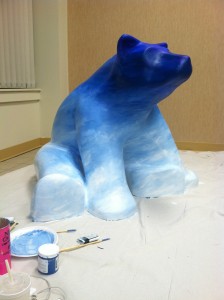 Once it was a rich blue, I painted the butterflies again.  I started with the wings, not the lines of the bodies.  I wanted them to be blurry, like they were in motion. 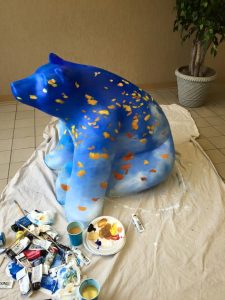 After the orange and yellow wings were dry, I added some dark brown lines.  But not everywhere, just in some places.  Like the way you glance at something and you don’t see all of it. 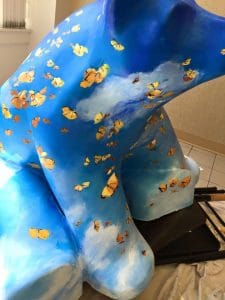 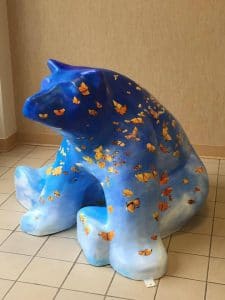 I wanted the form of the bear to disappear, so that you’d forget you were looking at a bear and just fall into the illusion of space and movement.  I thought it worked sometimes, depending on how the light was LOL!

Once he was finished, my dear friend gave him a ride over to Bob Rohrman to be clear coated. 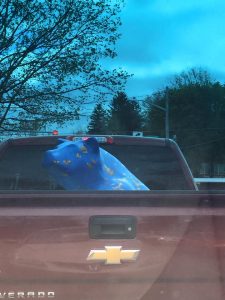 Next, the bear was put on display, right in front of the Lafayette Brewing Company.  It was SO cool walking around town and seeing all of the bears the artists had made, and seeing people enjoy them. 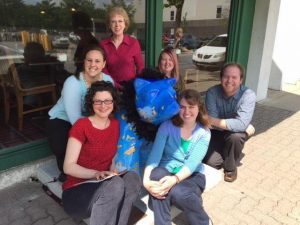 The only bummer was shiny polyurethane changed the surface of my bear – once it was sprayed, it was much harder for the form to disappear, because the surface reflected the light. 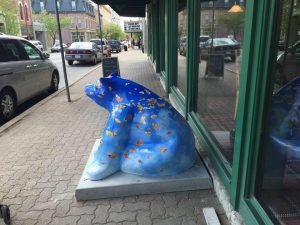 I’m very concerned about the Monarch butterflies.  I was actually in the migrating Monarchs once, in about 1994 or so.  We just happened to be camping on the Mississippi, at Merrick State Park in Wisconsin, and it was their time to fly through.  It was really amazing, standing among thousands and thousands of butterflies out on a random trail

Of course we didn’t have a camera with us.

I just always assumed that my children would grow up and have the same wondrous experience.
I really wanted to give them that.
Only now it doesn’t seem likely.
Instead, I gave them this. 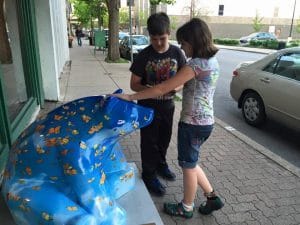 The bears were all auctioned off to raise money for the art museum.  I believe that a couple of corporations purchased Monarch Bear and gave him to a community center. 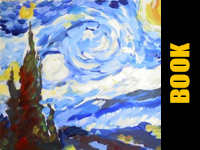 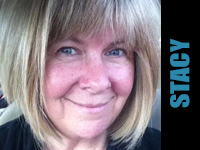 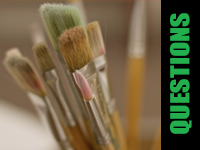 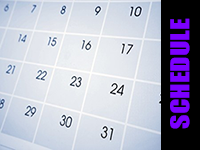 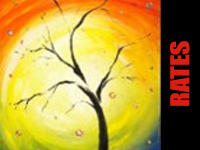